Getting customers engaged with your product can be a difficult task. Heck, even getting them to finish the sign-up process can be a struggle!

While digging through some old marketing research journals here, I came across an incredible concept called the Endowed Progress Effect, which I think can really help impact your engagement.

Presented in a 2006 study, the Endowed Progress Effect is the idea that consumers like to achieve goals that have “discrete, extrinsic rewards”. And if they are given the illusion that they are closer to their goal, then they prove to be more likely to persist and reach their goal.

But what has this got to do with your consumers? Well, quite a lot actually.

If we take a look at this study’s findings, they are remarkably applicable to your businesses on-boarding process. Here are 3 takeaways from the Endowed Progress Effect that you can implement into your business today.

Double Your On-boarding Completions By Starting At 10%

One of the key ideas that is talked about in this study is that customers are more likely to complete a goal if they are provided with artificial advancement towards that goal.

Let’s take a look at the experiment they carried out to understand this concept further.

The results were interesting to say the least. 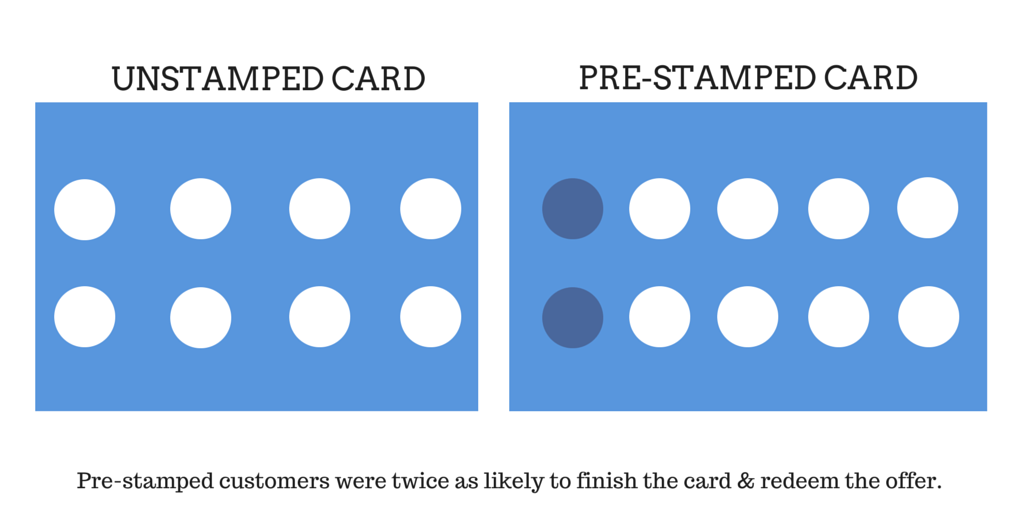 Months later the pre-stamped card holders proved twice as likely to finish the card and redeem the offer.

Customers, once given the feeling that they had already made progress, were more motivated to finish and reach their goal.

That’s loyalty cards though. How can we use this principle to double your on-boarding rates?

Your customer wants to start using your product and begins your on-boarding flow. They are taking the steps to start an account. They have no idea how long this process takes and are starting out at 0% complete. They get frustrated and leave.

Here is an example of this in action. It’s from Duolingo’s on-boarding process. 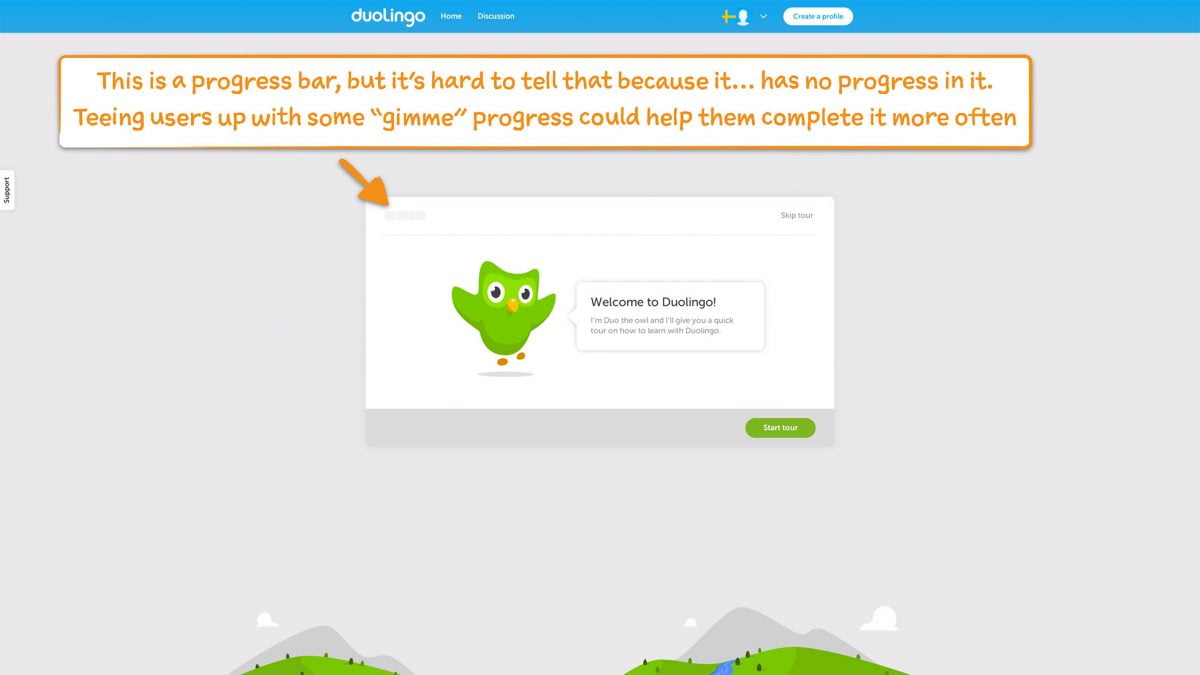 Pointed out by Samuel Hulick, there is a small progress bar. However it’s difficult to see and doesn’t really tell customers how far they are.

So why not give them the extra 2 stamps?

Duolingo could start customers off with 10% in the progress bar. It’s a head start. It gives the customer the feeling that they are already making progress. And makes them determined to reach their goal of using the product.

Using a progress bar throughout your website can be a great motivator. Look at how LinkedIn use them within their site. 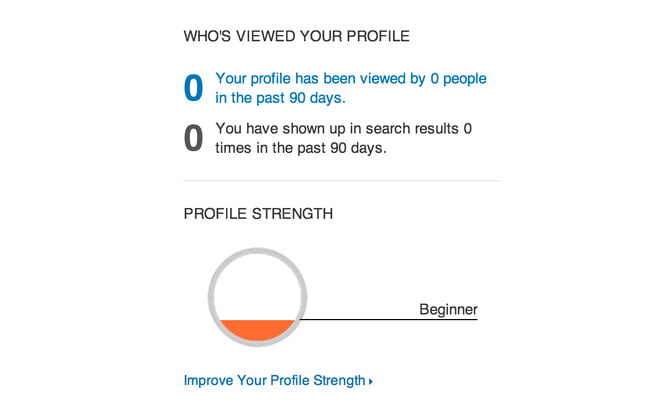 They attempt to get customers to complete their profile by showing them a percentage measuring how close they are to finishing. It’s that clever little motivator, enticing customers to reach their goal.

The Effort Feels Less When Progress Is Recorded In Points

The Endowed Progress Effect is also tested in other ways throughout the study. A particularly interesting one is when progress is given in points, customers are more likely to complete.

Again a similar experiment took place in a drinks store where customers were told that the store had a frequent buyers program.

The progress was recorded in points, rather than bottles purchase. 10 points for each bottle purchased with 100 accumulated points getting them the free bottle.

The results showed that customers engaged more with the loyalty scheme when it was measured in a more abstract way with points. The study stated:

“When the endowed progress is issued in points, both the endowment and the return to effort appear more significant, and thus effort will increase”

So what should we learn from this?

If we look at Duolingo again, they have incorporated a points system. 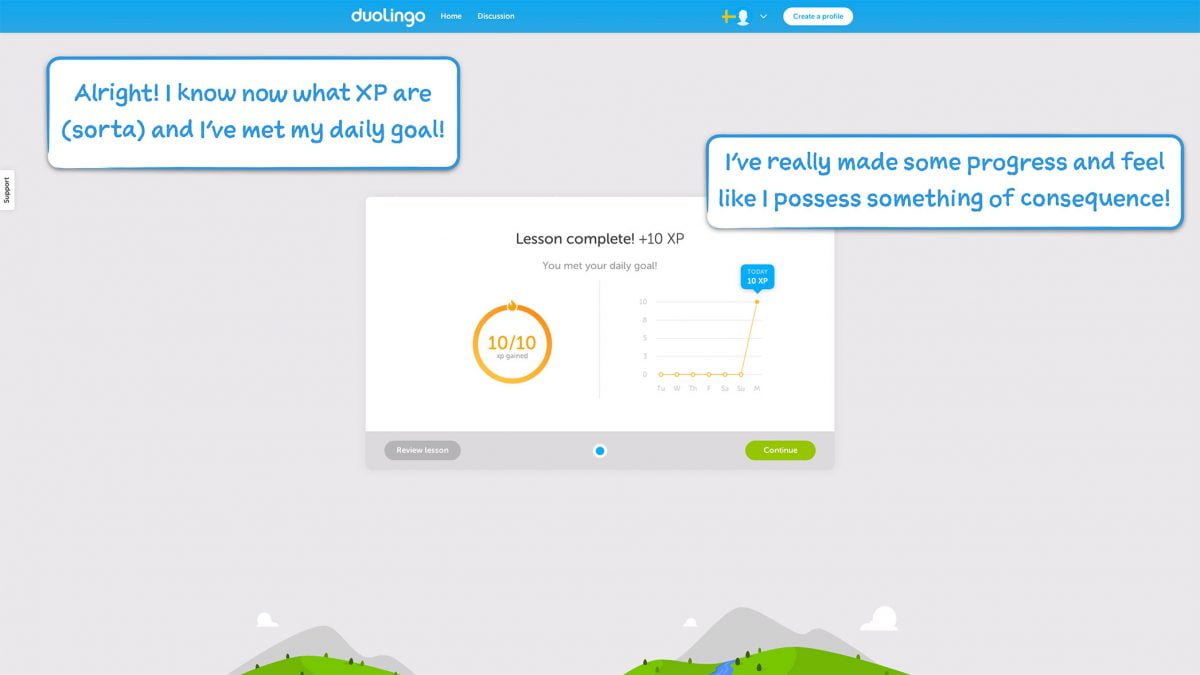 Instead of measuring in hours invested or lessons completed, users have a daily goal and when completed they get XP.

Hearing that they have “10 points” rather than “10 lessons” to go is much more motivating to the user. It feels easier to accomplish.

The wine purchasers felt they were earning points (benefit), not buying bottles (investment) and the same can be true for someone like Duolingo.

They are actually earning something. It’s clever and removes a huge amount of friction from the on-boarding process.

The First Win is Vital

One of the most astounding findings of the study is that the early wins are compounding.

In the first experiment with the car wash, something interesting happened with how quickly customers achieved their goal.

Not only were the pre-stamped card holders more likely to complete their card, they also did it faster. With each punch they earned, the time between visits was reduced. They came back faster, more motivated to get their reward.

Imagine that applied to your own business.

Using these tactics you could be not only acquiring new users that are more likely to purchase or activate, but getting them paying faster.

If you could close the time between acquisition and first purchase then it would reduce the amount of time it takes to earn back the cost of acquisition for that customer. You can then start using this revenue to acquire further customers leading to dramatically faster growth.

Again, we will use Duolingo as an example. Let’s imagine that after 5 lessons (or 1,000 points) the user would have to start paying for lessons.

If you start users with a 100 for completing their profile (the pre-stamped card), the study says they’re likely to complete the next 5 lessons and reach the ultimate goal much quicker. 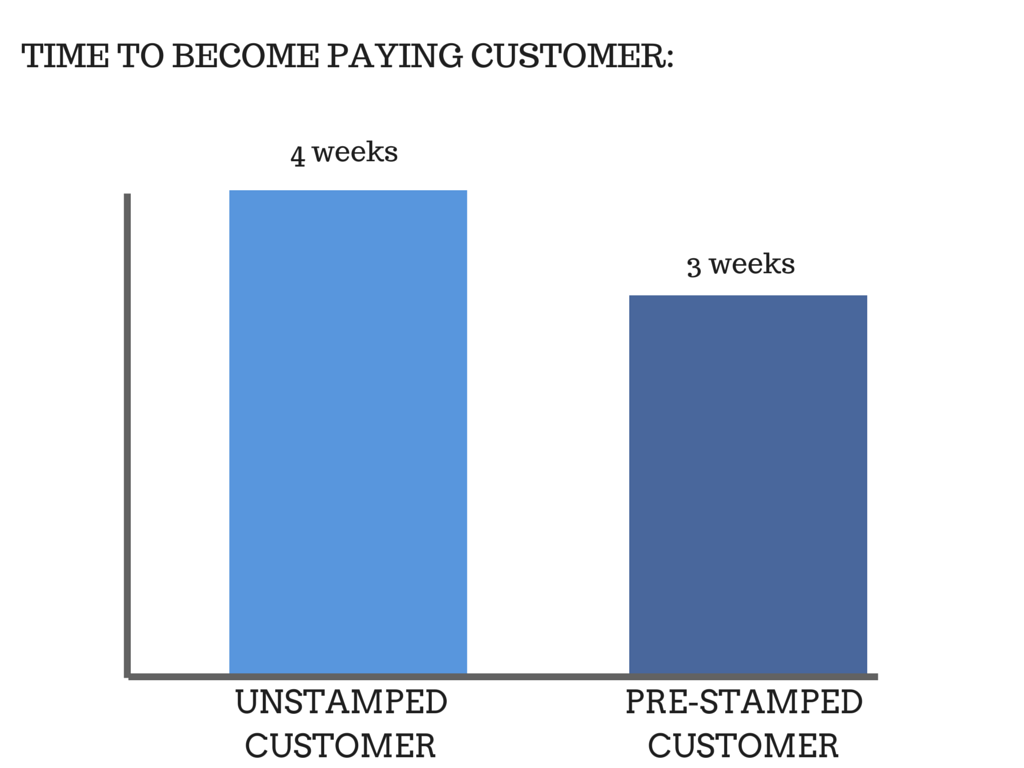 Instead of taking a month to reach the stage of becoming a paid customer, they do it in 3 weeks, for example.

That’s an extra week of Duolingo getting paid. An extra week to reinvest that revenue to attract other customers and grow faster.

Making The Endowed progress Effect work for your business

The Endowed Progress Effect offers interesting insights into how your business could successfully on-board users. It is just a case of taking the ideas and making them applicable to your business.

Think about these lessons, brainstorm how you could utilize them and try to fit them into your business. They could yield interesting results. And be just the right tactics to accelerate your business growth from zero to 1 million users.

Work with us
Fill out the form below to speak with someone from our team.